Life Of A Catamaran Captain In Ibiza

I had many clients interested in knowing what the life of a catamaran captain in Ibiza is like.

I usually tell them …

“It is much more than what you may think”

The first thing I would like to say is that I love my job!

Without a doubt, it is a dream job, and I feel lucky to be a catamaran captain in Ibiza and Formentera. 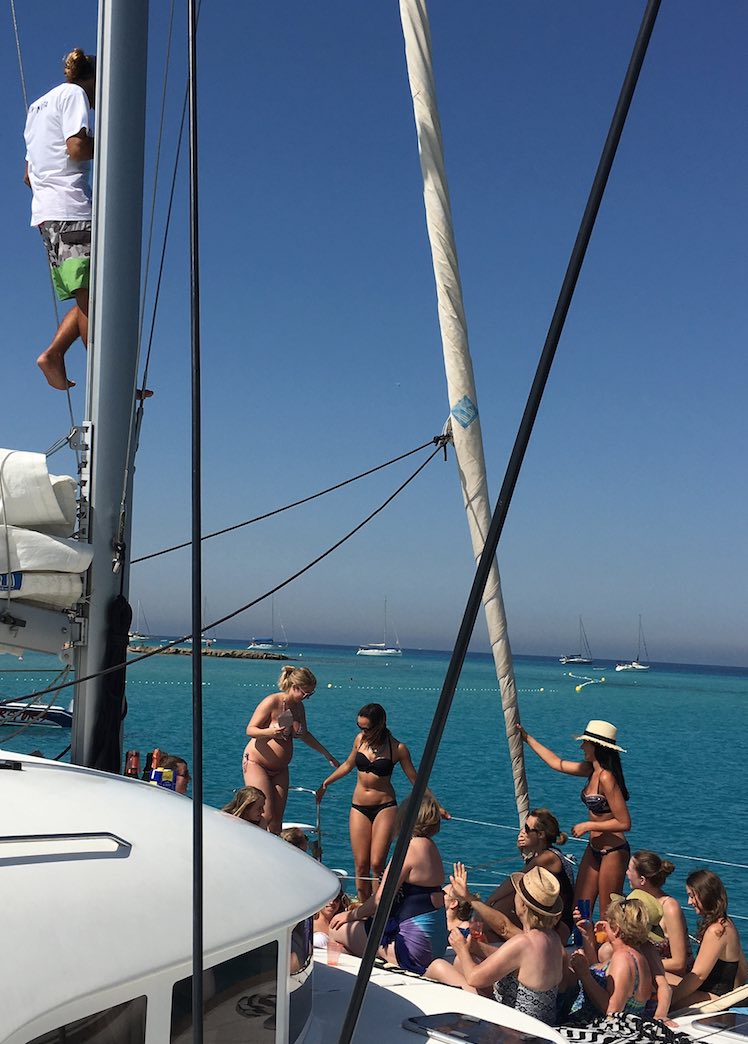 Is it the perfect job?

I had plenty of jobs in my life, some of them I didn’t really enjoy, but I did it as well as I could, I went home every night and I didn’t think about it until next day.

But, the job of a catamaran captain is one of those jobs that if you don’t love doing it, if you’re not one hundred percent involved, if you’re not willing to sacrifice your personal life, then it is impossible to do it.

Sun, crystal waters, happy people and what else?

Contrary to what many people think, at least what my friends think, it is much more than sailing from point A to point B surrounded by pretty girls. Well, that is also part of the job 🙂 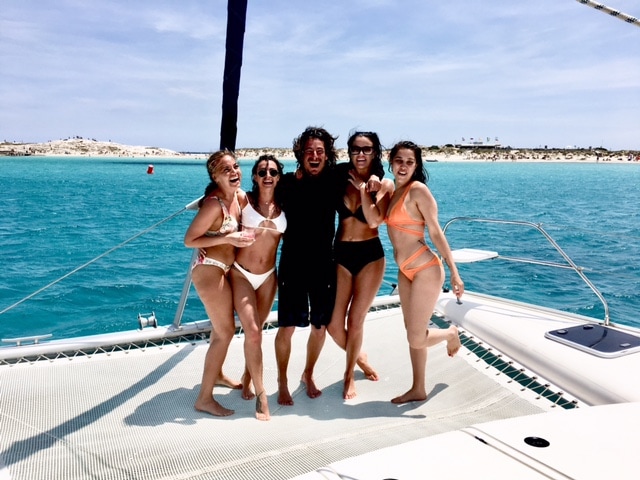 To me, surely the “easiest” and most enjoyable part of the work is when customers are on board.

Sailing and getting customers to beautiful spots while enjoying the views is, without any doubt, the most beautiful and enjoyable part of the job.

Besides, the sailing is always close to the coast, rarely at night, and indeed in a spectacular setting. Once you know the islands of Ibiza and Formentera, it is like walking around the neighborhood.

Not only about enjoying but ..

Be responsible for the boat’s safety and passenger’s safety 24 hours a day for at least four months in a row.

It is a huge responsibility, with no room for mistakes and no room for anything else but work.

So, indeed it’s much more than being at the helm with a big smile.

Two jobs in one

The week-long catamaran charter in Ibiza and Formentera is a real professional challenge.

The arduous preparation of the catamaran for the week charter, being in charge of the safety of a group of people 24 hours a day, seven days a week, dealing with the weather, and just to complete the picture, the captain as to do the impossible to make the customers have fun.

Without any doubt, the most unpleasant task of this work comes when the client is not yet on board.

Getting the catamaran ready for the week charter

Many things need to be handled to have everything ready when customers check-in and very little time to perform the tasks.

Usually, the customer on a week charter disembarks at 9 in the morning, and the following ones get onboard at 4:00 p.m. Those are stressful hours for a captain.

Sometimes there is time for a coffee, and sometimes the captain doesn’t even have time to say…

Usually, captains work one week after the other throughout the summer. At the end of September, captains have already work 15 consecutive weeks or even more. Yes, fifteen weeks in a row without a break. As I said in the first paragraph of this post, it is necessary to have this job tattooed in the DNA to actually have the energy to do it.

Everything is worth it when you see the customer enjoying.

That hard work is compensated by the bond that arises between captain and customers after a whole week of sharing beautiful moments.

That is one of the most incredible and positive points of working as a captain for catamaran week charters.

To me, the catamaran day charter in Ibiza and Formentera is a much easier job.

It’s an eight-hour charter, plus the time invested in getting the catamaran ready (no less than two and a half hours).

The preparation of the catamaran for a day charter is more relaxed than for a week charter. In general, a thorough cleaning is done of the exterior, the interior saloon, kitchen, and one of the bathrooms. Those are the areas of the catamaran that are likely to be used by the client.

The itinerary has been chosen according to both the customer and the weather forecast. It is a script already written.

After no less than eight hours, the client says “Bye-bye” with an even bigger smile than when checking-in, some cleaning, dinner, and there is some time for oneself, read, watch a movie, sometimes navigate to the next meeting place, or simply relaxing.

A perfect ending for a perfect day charter

Although the day charter job is much easier than the week charter job, it’s for sure, a more intense job. Day after day, one different group after another, can wear out quite a bit.

Catamaran day trip groups come onboard with full energy. A little nap does not stick to their day plan :). Captain has to give it all. While on the week charters, there is always a small-time for relaxation during the day.
.

What Chartes Eleven do

I personally like to do every type of charters, and I really prefer to vary between one ant the other.

With Charters Eleven, I also try to get out of the routine. Everything is valid to keep my energy and illusion at the top. I try to intersperse the one-day catamaran rental with the weekly catamaran rental. I also offer weekends, single days, so it doesn’t become a monotonous job.

Because, as my grandmother used to say;

“You can even get tired of JAMÓN SERRANO”

If you have already been in Spain, you should know what Jamón Serrano is 😉

If this summer is your first time traveling to Spain, it should be the first meal or “Tapa” you should ask for when ordering in a restaurant.

The best of being a catamaran captain in Ibiza

Without a doubt, the customer is the best part of working as a catamaran captain.

I’ve never imagined myself laughing hard with a group of guys from Orleans. Singing, with a Polish couple, songs that I had never heard before. Talking about Brexit with a Russian family that doesn’t speak Spanish and babbles little English. Feeling part of a family that little before were total strangers.

These are funny, unforgettable, and amazing moments that this job has given me every season I have worked as a catamaran captain in Ibiza and Formentera.

Also, people come onboard to have fun, with a big smile, with joy. I assure you that it’s something that I appreciate very much, especially after having worked as an IT engineer, where every time the phone rang, it was to hear a third-party problem that magically became my problem.

And the coves of Ibiza and Formentera, their waters, the starry nights, the morning baths, sailing, sailing, and more sailing. The truth is, in these six years working as a captain, I have not got tired of the incredible beauty of these Mediterranean jewels.

As in any job, there is always a dark side, and from my point of view, it is …

That can become quite difficult to handle as the weeks go by. It is four months in which the captain is one hundred percent dedicated to his work.

We Ibiza catamaran skippers are indeed one big family.

Greet your partner when arriving at a cove, and if there are no customers, go to dinner on a colleague’s boat or receive him on yours, talk about our things, have a beer, and laugh for a while, that gives us that brief moment of leisure that we all need. 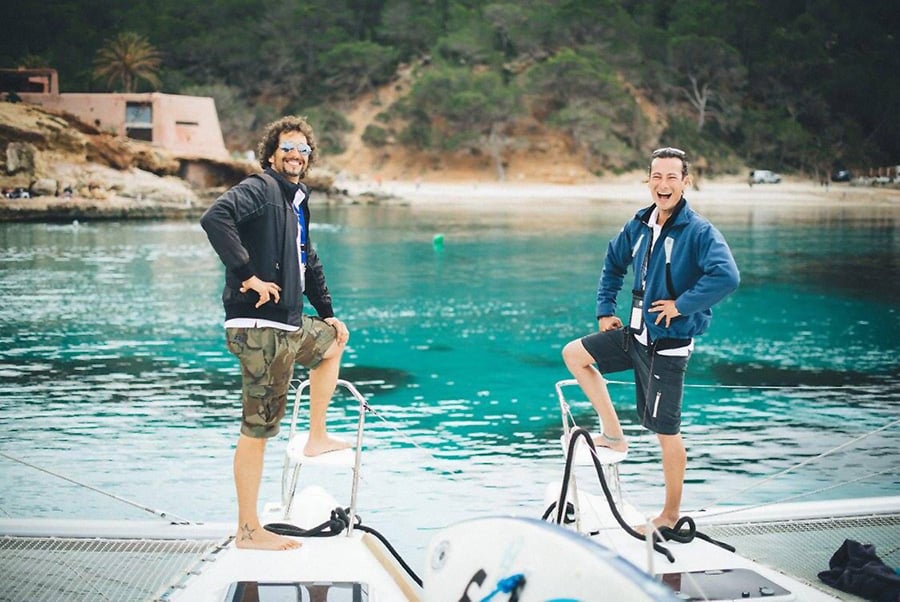 When two captains get together they make that “Good to see you!” face.

Although every catamaran captain in Ibiza loves his job, fatigue can even defeat the lame pirate, with a mean face and an eye patch.

After working as a catamaran captain for a large company in Ibiza, wherein four months I did not have one single day off, I promised myself not to go through that nonsense again.

Either the Skipper is Superman, or at the end of the season, he is burned out.

Because an exhausted skipper may not offer a good service and, more importantly, may not be capable of focusing on customer safety.

Nowadays, with charters Eleven, I give myself a day off every ten days or so to always feel well-rested and give Charters Eleven’s customers a five-star service. 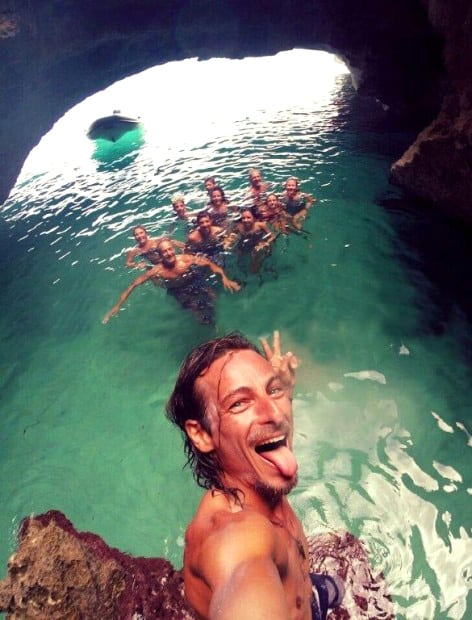 Sometimes the captain has work hard and take a bath with the customers.

What does an Ibiza catamaran captain in the cold winter?

Many captains work the summer season in Ibiza, and in winter-time, they go working to other islands around the world, such as the BVI or the Canary Islands. They work where the sun shines. They also often do the transfer of the boat. Other captains do small jobs here and there or are dedicated to spending the money earned in traveling.

In my case, I have been through many winters. Traveling around Asia with my backpack. Atlantic crossing sailing a catamaran from the Canary Islands to the Virgin Islands in the Caribbean. A Pacific crossing onboard a catamaran. Dive trips. Road trip around Spain. Again, variety is the key to not get bored 🙂 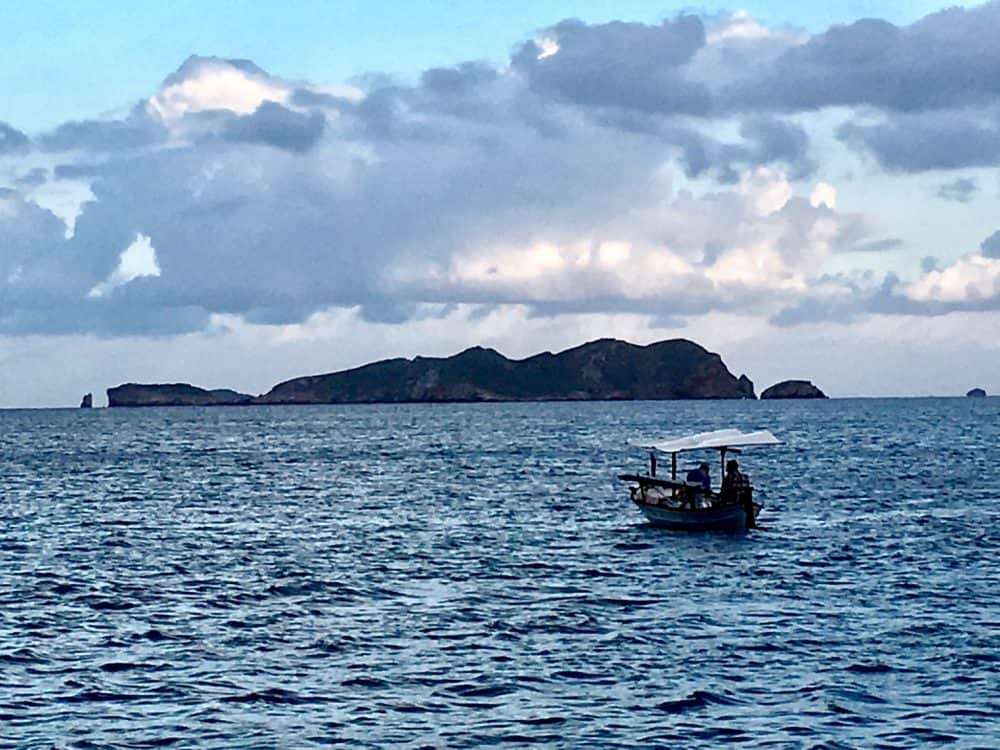 Nowadays, as a skipper and catamaran owner, I try to travel for a while in December and January. From February to April, I take care of Geronimo, making him fit to work hard the following season.

It is really incredible the number of things that must be done to maintain a boat, especially since it is a boat for rent, and everything has to be perfect. I will soon write a post about that. If you think about reading it all, make sure you have time for it.

I try to do as much as possible by myself, growing as a skipper, and be as independent as possible. Because someday, one day, I will go sailing around the world with no return date.

Which captain do you know who doesn’t have that dream?

I hope you liked this post. It’s just a personal opinion based on my professional experience.